Qigong (also known as Chi Kung) means the cultivation of energy. It is a gentle form of Chinese health exercise which emphasises softness, natural movement and the release of tension to improve health and vitality. Qigong, which has been practiced over five thousand years is considered to be a pillar of Traditional Chinese Medicine and is sometimes described as the “Grandmother of Tai Chi”.

Nina has drawn on many traditions and practices of Qigong, including Five Element Theory, Shibashi and Hua Gong to promote relaxation and wellbeing by connecting with and increasing internal healing energy.  Her classes are based on combining flowing movement with deep breathing and focusing the mind using visualisation techniques, meditation, and self-massage (also known as Do-In).

Practicing the gentle, rhythmic movements of Qigong leads to:

It has also been found to improve cardiovascular, respiratory, circulatory, lymphatic and digestive functions. 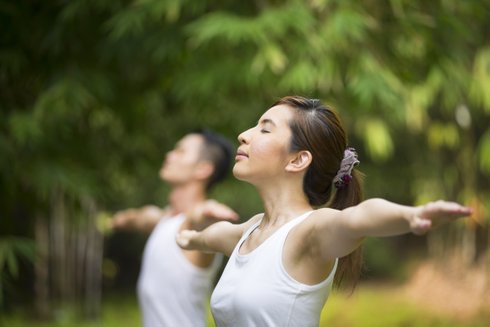 The classe runs as drop in, so no need to book

Taking one to one sessions is fun, highly focused and fully tailored to your needs. They take place in the convenience of your own home.

As the number of sick days tot up, cases of depression and anxiety rises, there has never been a more pertinent time to invest in employee wellbeing. Weekly, monthly and one off classes are available in your offices at a time that suits you.

Because Qigong includes both dynamic and gentle techniques that can be practiced from standing and seated postures, it is suitable for people of all ages and abilities. Practices can be tailored to individual needs making it an ideal aid to physical, emotional and spiritual wellbeing and for recovery from illness or injury. Qigong is a form of complementary medicine. It works well with other forms of therapy but should never be used as a substitute for necessary treatment by a physician.